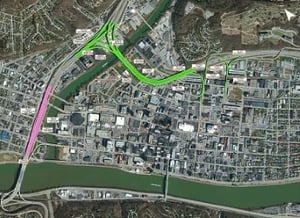 Here at expeditedfreight.com we're always pleased to share news about major highway improvements as our urgent trucking services are reliant on avoiding bottlenecks and ensuring your freight arrives on time. With that said some major improvments are nearing completion on Interstate 64 in Charleston WV which will help traffic move more freely through the city which sees I-77 and I-79 also converge.

Charleston is a crossroads for expedited freight heading west into Kentucky, north into Ohio and Pennsylvania or back towards the southeast coastal states. The center of Charleston has an extended elevated section and numerous bridges which are are each seeing significant improvements this summer.

Overall the project calls for $18 million worth of improvements to the highway with repairs and upgrades currently causing expected congestion, however the work remains on schedule at present. If the weather cooperates, the entire project is expected take around seven months to complete and will also see improvements to the connections with interstates 77 and 79.

Major changes are planned for I-64 Dunbar/South Charleston Bridge which requires construction of new multi-lane bridge adjacent to existing bridge spanning Kanawha River between Dunbar and South Charleston. Completion date is currently planned for the end of October 2015.

Video above courtesy of the WVDOT.